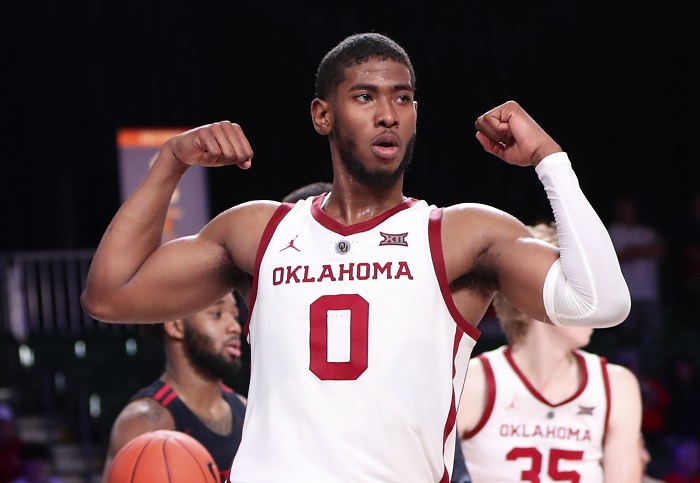 Between now and the beginning of conference action in Big 12 men’s basketball, HeartlandCollegeSports.com contributor Matthew Postins will watch at least one game for each Big 12 team and assess where each team stands in the final weeks before league action. Today it’s the Oklahoma Sooners.

The evolution of Christian James

The 6-foot-4 senior guard is clearly a different player than he was a year ago. Let’s start with the shooting. He’s shooting 7 percent better overall and from the 3-point line from a year ago. During the Notre Dame broadcast Jay Bilas talked about the thousands of shots James put up this summer using one of those automatic rebounders. The hard work has clearly paid off. He’s extended his range to the NBA 3-point line and he’s certainly more accurate. Against Notre Dame he scored 25 points and had 10 rebounds. Perhaps more importantly it was James who made the critical baskets and free throws down the stretch to secure the win. I wondered who would be “the guy” down the stretch for this team. The early returns are that it will be James, who is averaging 19.2 points per game (through Dec. 12), eight points better than a year ago, and second in the Big 12. He’s not just a jump shooter, either. He can drive the paint, post up, be physical and pass on the run. His game has evolved and the Sooners will be better for it. He now looks like a player that could get NBA looks, most likely as an undrafted free agent.

The Sooners were built around Trae Young last year. Head coach Lon Kruger had to embrace that by Big 12 play because what Young was doing was truly special. In some ways the “team” aspects of what the Sooners wanted to do suffered. Going into this season I was wanted to see who would assume Young’s mantle. Kruger said during Big 12 Media Days that he expected it to be players, not a player. So far he’s been right. James may be “the man,” as I anointed him earlier. But the Sooners have four other players averaging at least nine points per game — Jamuni McNease, Brady Manek, Miles Reynolds and Aaron Calixte. Another, Kristian Doolittle, is pitching in six points per game. But it’s more than scoring. Just watching the game with Notre Dame the team played much more five-man basketball, on both offense and defense. That’s not meant to be a slight on Young and what he meant to that team last year. Every iteration of a team looks different based on personnel. But this group looks cohesive and looks willing to share the burden together as opposed to letting someone assume it. As Big 12 play approaches, that sense of balance and assertiveness will help.

I didn’t get my first look at Manek until the Notre Dame game and I was stunned. The crew cut was gone. Way. Gone. The crew cut has been replaced by a mop top and a mustache that looks suspiciously like Larry Bird’s, circa 1979. I’m not going to compare Manek’s game to Bird’s because, well, that would be ridiculous. But, what Kruger wanted out of Manek going into this season was to gain a little muscle — which he has — and become more of a “driver” to the basket. Kruger felt Manek settled for more jumpers last year and I would agree. Manek can rifle it from outside (he’s shooting 29.5 percent from the arc right now, but he was 38.3 percent a year ago). But at 6-foot-9, Kruger and the Sooners need Manek to drive more. He’s did that plenty against Notre Dame, ending with 17 points and 8 rebounds (he is OU’s leading rebounder to this point). Plus he took an inadvertent elbow to the right eye in the first half and played a good portion of the rest of the game playing with a gash above the eye being held together by what I would best describe as Gorilla glue. The toughness is great. The desire to drive to the basket more is even better.

The transfers are fitting in nicely

The Sooners didn’t just lose Young to the NBA. They lost a couple of other guards as they left the program and it created the one significant void Kruger had to address this offseason — backcourt depth. He did it with a pair of transfers — guard Aaron Calixte from Maine and guard Miles Reynolds from Pacific. Both were successful at their former schools and they’ve fit in well with OU. The plus is that both can handle the ball (though Calixte seems to be the de facto point guard) and run the offense. Both are solid passers — Calixte had four assists vs. Notre Dame and Reynolds had three. Calixte leads the team in assists with 26. Against Notre Dame Calixte had 12 points and Reynolds had 9, and as mentioned both are averaging about nine points per game. Calixte, Reynolds and James all need to clean up the turnover game — Calixte’s assist to turnover ratio isn’t that great while Reynolds and James are both upside down — but the tools are there for this transfer duo to be key parts of this OU team for the entirety of the season. Kruger made two solid signings here.

Three things to watch out for

I mentioned the turnovers already. It bears mentioning that while OU had 12 turnovers against Notre Dame, the Sooners only forced 4. As a team they’ve committed more turnovers (119) than their opponents (108). In the Big 12 the Sooners have the league’s second-worst turnover margin (minus-1.2) and the third-worst assist-to-turnover ratio (1.0). Second, I have concerns about the frontcourt depth, though it should be noted that Jamuni McNeace didn’t play against Notre Dame. Perhaps that’s the reason for my concern. Without McNeace the Sooners won the rebounding game, but only by one (they usually outrebound opponents by 5 rebounds per game, on average). Doolittle hasn’t shown much improvement inside to this point, while Matt Freeman and Hannes Polla feel like players that are just there to hold down the fort (though in fairness Freeman had 11 points against Notre Dame, but nine came on 3-pointers). One injury in the frontcourt and the Sooners could have significant problems. Third, I was taken aback by the Sooners’ inability to adjust to Notre Dame’s 2-3 zone in the second half. That’s a pretty simple fix but it took several minutes for the Sooners to make the mental adjustment and rotate the ball.  Those adjustments need to be faster. You don’t see a lot of zone in the Big 12, but if opposing coaches see that the Sooners have trouble with it, then you can bank on it being used come next year.

I asked Kruger in October if there was a chance he could have a 10-man rotation by Big 12 play. He answered yes. I thought he was being overly optimistic. But the Sooners have nine players logging at least 12 minutes a game. I didn’t even mention freshman guard Jamal Bieniemy, who has been a solid bench presence and leads the Sooners in steals. This team looks much different than the Sooners of a year ago, and that’s not necessarily a bad thing. No, they’re not going to make 30-foot 3-pointers. But their balance on offense, determination on defense and depth in the backcourt will make them an intriguing player in the Big 12 race and a harder out than some Big 12 coaches and observers might have thought a couple of months ago. I liked what I saw against Notre Dame, and wins over Florida and Dayton on neutral ground signal to me that the Sooners will be ready to roll in Big 12 action.

Next up: The Iowa State Cyclones look revitalized, despite injuries and suspensions, in a loss to Iowa. 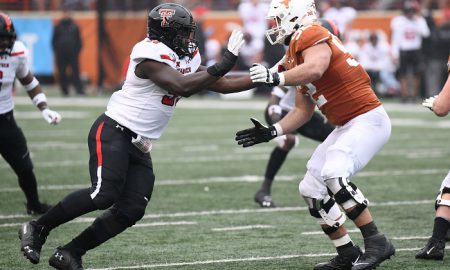 The Texas Longhorns’ chances at a Big 12 Championship came to an end on Black Friday (how appropriate) following their loss to...

If you told me before the season started that the Kansas State Wildcats would be 4-5 and heading into a game against...

No. 2 Baylor Opens Season with Win, Oklahoma State Improves to 2-0

The No. 2 Baylor Bears defeated Louisiana, 112-82, as the Bears snuck off to Las Vegas to get in a couple of games...

Normally when a player is third on the depth chart, you rarely expect them to play. Especially when they are behind All-American...

Kirk Herbstreit: ‘Is it just me or do you want to play for Matt Campbell?’

Iowa State Cyclones head coach Matt Campbell is, once again, the hottest name in the college football coaching world. This came after...