Arlington, Texas – Saturday was the 114th meeting between Texas and Oklahoma. While you could make an argument that all those meetings were important, this meeting was on another level. This game had a much different field to it. Instead of the usual stomping grounds in the Cotton Bowl, this match up was held at AT&T Stadium, otherwise known as Jerry World. However, the location didn’t matter because when these two meet up for a football game, people will show up. By the look of the 83,114 people in the stands (which broke a college football record), I would say they did and then some. Did I mention that there was a Big 12 title on the line? Oh yeah, I guess that was important too, huh? Whether your horns were up or down, this game had plenty of action for everyone to enjoy.

Texas got the football first and they made the Sooners pay for deferring. Sam Ehlinger was able to convert three third downs and on the final one he ran it 16 yards for a Longhorn touchdown.

The Sooners first drive started off well, and with a few Texas penalties, they found themselves on the Texas one-yard line. On third and goal though, Texas stuffed Oklahoma running back Trey Sermon for a loss and the Sooners were held to just three points. Then on the following Texas possession Oklahoma got a rare third down stop but then the Sooners offense was once again held to another Austin Seibert field goal thanks to Texas corner Kris Boyd knocking the football out of Marquise Brown’s hands that would have been a touchdown for OU.

With a 7-6 ballgame, the Longhorns responded with a nine play, 75-yard drive that resulted in another Sam Ehlinger touchdown run, this time from three yards out to help Texas extend their lead to 14-6 over the Sooners early in the second quarter. The two teams traded punts and then the Oklahoma offense finally found the end zone when Kyler Murray threw a beautiful 46-yard strike to Cee Dee Lamb for a touchdown. Just like that, the Sooners offense woke up. Before the first half ended, Oklahoma had one final drive starting on their own 20-yard line with 51 seconds left and no timeouts. Five plays later (and a miraculous Ceedee Lamb catch), the Sooners hit pay dirt when Murray hit tight end Grant Calcaterra for the score. Oklahoma took their first lead of the game and going into the break, they led Texas 20-14.

The Sooners came out of the second half swinging as they wasted no time finding the endz one. Kyler Murray marched the football right down the field and running back Trey Sermon capped it off with a 6-yard touchdown run to extend the Oklahoma lead 27-14.

Following the score, the Texas defense stepped up and forced the high-powered Oklahoma offense to go three and out. That’s when the momentum started to swing a little and the Texas offense didn’t disappoint as they completed a lengthy eleven-play drive that ended in a 5-yard touchdown pass from Sam Ehlinger to Lil’Jordan Humphrey. Texas would have gone up with the extra-point, but it was blocked by Oklahoma’s Amani Bledsoe and the game was tied at 27 all late in the third quarter.

Once again, the Sooners were able to get deep into Texas territory, but had to settle for another Austin Seibert field goal that clanked its way through the upright to give his team the 30-27 lead. Two drives later, Oklahoma got the ball back and after a huge play by wide out Ceedee Lamb, he fumbled and gave Texas the ball back at their own 8-yard line. However, the Sooner defense corrected that mistake with a Tre Brown safety sack to extend the Oklahoma lead 32-27 with 8:27 left to play.

BOOM! Wow what a call by Ruffin McNeil on the corner blitz. Safety and OU goes up 32-27 on Texas. #Big12Championship pic.twitter.com/d9VxmQNygT

Then on the most crucial drive, Oklahoma executed to perfection because not only did they score, they took 6:27 off the clock. On third and ten from the Texas 18-yard line, Kyler Murray put the game on ice when he found tight end Grant Calcaterra for the touchdown to seal the game. That was good enough to extend the Oklahoma lead 32-27 with just two minutes left to play. But the madness didn’t stop there because on the following kickoff, Lil’Jordan Humphrey ran it all the way back for a score and the heavily burnt orange crowd erupted. It was short lived due to the fact there was a flag on the field that erased the kickoff return. Texas never recovered from that and when Sam Ehlinger was intercepted by Tre Norwood, that was all she wrote as the Sooners beat Texas 39-27.

After the win, Oklahoma head coach Lincoln Riley choked up when he told Holly Rowe of ABC, “It’s been a hard year. Four in a row, something that’s never been done at Oklahoma or in this league. I’m so proud of our guys, Texas is a great team, great battle with them, both of them this year. But we’re the champs and it feels so good.”

Riley was also asked to pitch this team to the College Football Playoff committee, to which he responded, “Because of what you saw today. A 12-win team. A team that keeps getting better and better. Our defense played its tails off today. We can’t wait for what’s next.”

The Sooners did make Big 12 history on Saturday afternoon at AT&T Stadium, but will that be enough come Sunday morning? Time will tell.

Oklahoma State Needs to Figure Out Their Wide Receiver Situation, and Fast

Did you play receiver in high school and currently live near Stillwater, Oklahoma?  If so you might want to show up at...

How to Watch Kansas State vs. Oklahoma State on ESPN+ (ESPN Plus)

Kansas State and Oklahoma State open up Big 12 Conference play this weekend in a game that will feature two of the...

Leading up to the opening of the 2021-22 Big 12 Men’s basketball season Heartland College Sports will analyze each of the Big... 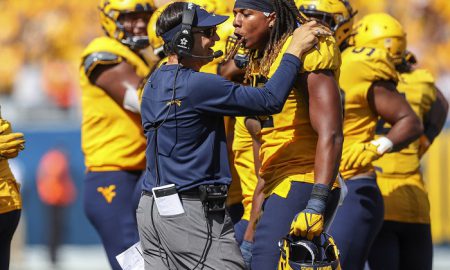 Big 12 Football Week Three: The Good, the Bad and the Ugly

It was another crazy week in the Big 12 from the off the field news to the on the field play. There...

Podcast: Big 12 Football Championship Preview: Oklahoma vs. Texas and Coaching Changes
Despite SEC Bias, Oklahoma Should be in the College Football Playoff
To Top