From 5-2 to 5-7. Texas Tech needed to win one of its final five games to become bowl eligible. The Red Raiders couldn’t do it. Now, Kliff Kingsbury has reportedly been fired as the head coach.

We knew the tough three-game stretch of Iowa State, Oklahoma and Texas would be very difficult. But the season ended with two teams in the bottom half of the conference in Kansas State and Baylor. Unfortunately for Tech, it played its worst game of the season in Manhattan against a motivated Kansas State team which may have been the last time Bill Snyder would roam the sidelines at the stadium in his namesake. Then, there was Saturday’s 35-24 loss to the Baylor Bears, and Kliff Kingsbury may have walked off the field as the Texas Tech head coach for the last time in his career.

But that shouldn’t be the case. Kingsbury deserved to continue to be the head coach of the Red Raiders. Yes, the season didn’t go as planned. The final two games were tough to swallow. But two weeks ago, Tech had lost three games to three of the best teams in the Big 12 by a combined 21 points. In fact, Tech lost to Oklahoma, Texas, West Virginia and Iowa State all by single digits. Granted, coaches don’t typically keep coaches for “close losses”, but athletic director Kirby Hocutt needs to look at the big picture.

First, Alan Bowman. Kingsbury had his quarterback of the next 2-3 seasons. Who is better to groom him? The true freshman stepped in against Ole Miss and took the reins of this offense beautifully. Had he not suffered a collapsed lung and then a reinjuring of that lung, who knows how this season plays out differently. On Saturday against Baylor, Kingsbury was down to McLane Carter on one leg to try and win this game.

Let’s look to special teams, a unit that has drastically improved under first-year coach Adam Scheier. Individually, Dominic Panazzolo and Clayton Hatfield are both semifinalists for the awards given to the best players at their respective positions, punter and kicker. And as a unit, Tech ranks second in the Big 12 in kickoff returns, first in field goal percentage and third in net punting average.

Defensively, David Gibbs appeared to have a formula that could at least keep Tech competitive, when the offense is playing like it’s expected it to. The Red Raiders ranked sixth in rushing defense and sixth in pass defense efficiency. That should be good enough when combined with Kingsbury’s healthy offense. While the Red Raiders were not as good at forcing turnovers as last season, they still forced 16 this season, which is tied for the third-most in the conference.

Let’s look to next season. Tech returns four of five offensive linemen and all skill position players except for Demarcus Felton, Ja’Deion High and Zach Austin. That’s a great sign. Defensively, Preston Gordon, Jah’Shawn Johnson and Dakota Allen are big losses, but there’s depth there and the defense has now played in Gibbs’ season for a handful of seasons.

As for the wins and losses, it sure is disappointing Kingsbury’s best season was his first, in 2013, when he went 8-5. Since then, he’s 4-8, 7-6, 5-7, 6-7 and 5-7. That’s not good. But outside of the occasional 9-win season under Spike Dykes, and of course the success under Mike Leach, Tech has basically been a 5-7 win program. In fact, the Red Raiders have won 10+ games three times since 1960. Tech fans may not want to hear that, but to say Kingsbury has drastically underachieved the program historically would not be accurate. He deserved to see this next phase through with his quarterback of the future, the right coaches finally in place, and a solid foundation to continue with in 2019.

Tech needs to remember this too: It hired a 34-year old coordinator to be its head coach because he was an offensive guru and he was one of their “own”. But that means you need to take some of the good with the bad and work through the growing pains. There were times early in Kingsbury’s Tech career when he looked overmatched on the sideline and in running a program. I don’t think that’s the case any more. He had his guys competitive in every game, sans the opener when a true freshman quarterback had to jump in the game a few months after high school graduation, and the debacle in Manhattan.

I’ll also look to the 2019 recruiting class, that is ranked 42nd in the country and sixth in the Big 12. Not incredible, but solid considering he’s probably getting negatively recruited against as a guy on the hot season. Also, Tech’s top two recruits are defensive ends in Steven Parker and Gilbert Ibeneme. Yes, defenders. After that, the top recruits are offensive line, wide receiver and quarterback. Balance. One of the many things that tanked David Beaty at Kansas was his inability to recruit for the 2019 class (he had one commit). That was not the case for Kingsbury, who had one of his better recruiting classes lined up.

I would also pose this question to some Tech fans: who do you want?

Jim Leavitt? That’s a name Don Williams pointed out in his column this week, citing the relationship with Kirby Hocutt. That’s an absurd notion. He might bring an improved defense, but at what expense to the offense? Tech fans expect offense and Oklahoma is proof that a great offense can overcome a suspect defense to win conference championships and be relevant in the College Football Playoff discussion.

Is it a young, hot shot like Seth Littrell or Neal Brown? Even if they come in and turn things around, do they hang around for the long term? Also, they aren’t exactly kids, they’re the same age as Kingsbury, give or take a year. Sonny Dykes? The guys who being recruited now were not even born when his father, Spike, was the head coach in Lubbock (1999). It’s completely irrelevant.

I’m not usually a believer in not making a move for fear that you can’t do better, but when bundled as part of the bigger conversation and bigger picture, it’s relevant in this case.

But, now with Kingsbury reportedly out, we’ll see what Kirby Hocutt has planned for the Red Raiders. Will it be worth it or the right move? Only time will tell. 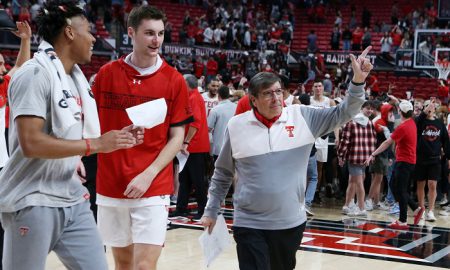 The Big 12 men played all five games slated this weekend and here are our three takeaways from the results of Saturday’s... 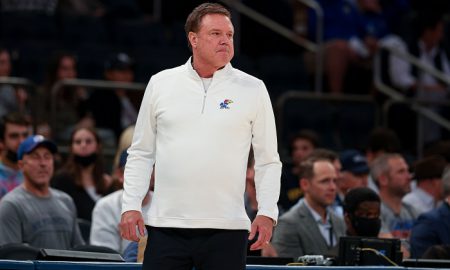 The Kansas Jayhawks defeated the Kansas State Wildcats, 78-75, in a Big 12 men’s basketball contest at Bramlage Coliseum in Manhattan, Kansas,...

Ashley Joens to Return to Iowa State Lineup on Sunday

Iowa State forward Ashley Joens will return to the lineup for the No. 7 Cyclones when they face No. 15 Baylor on...

Oklahoma Hangs On Against West Virginia, But CFB Playoff Hopes in Doubt
Iowa State Snaps the Farmageddon Curse of Bill Snyder
To Top