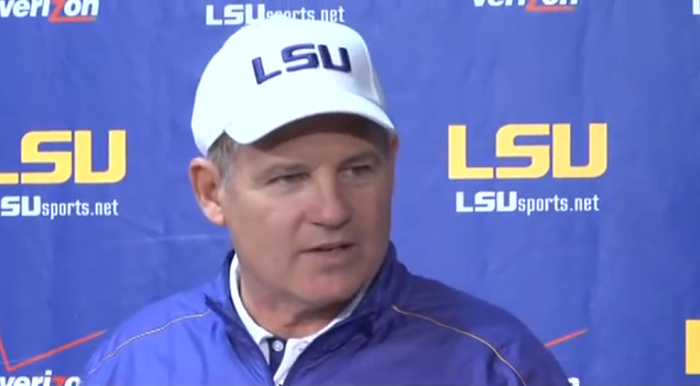 It’s official. The Kansas Jayhawks have hired former LSU coach Les Miles to be their next head coach in Lawrence.

Miles contract is for five years and worth $2.78 million per year, with additional retention bonuses due in November of 2020 and 2022.

Miles has been out of coaching since he was fired by LSU in the middle of the 2016 season and he recently took a buyout from the Tigers, signaling a deal was close.

In a statement, athletic director and long-time friend Jeff Long said, “Since the beginning of our search, we focused on identifying and recruiting an experienced head coach with a strong track record of success on and off the field. Les Miles is exactly what we need for our program right now. His national reputation as a great recruiter and as a coach who student-athletes love playing for will enable us to break the cycle and return a winning tradition to the Kansas Jayhawks. We are thrilled to have Les and his family as Jayhawks.”

In his own statement, Miles added, “I am humbled by the opportunity to lead the KU football program and I am grateful to Chancellor Girod and Jeff Long for the opportunity. We will bring Jayhawk Football back and we will do it with outstanding coaches, tremendous student-athletes of character and ability and an unrelenting drive for excellence. My family and I cannot wait to be a part of the KU family!”

Miles also has a long track record of sending players to the NFL. During his time in Baton Rouge, he coached an SEC-best 69 NFL draft picks, including 13 first round picks.

Miles will hold a press conference at Sunday at 5 p.m.