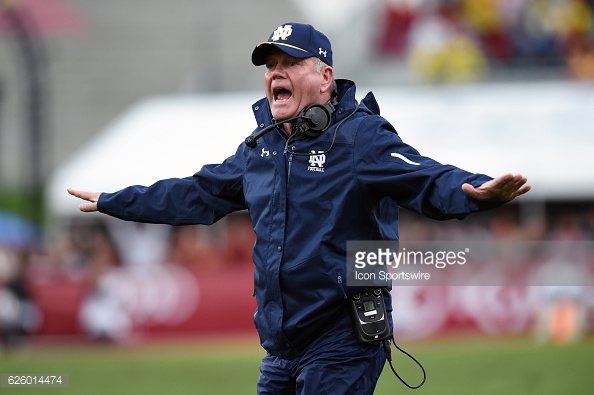 In the summer of 2012,  I was the sports director for a group of radio stations in Woodward, Oklahoma. Big 12 expansion and collapse was all the rage. Folks just couldn’t stop talking about it. But then there was the bombshell from OrangeBloods, that Notre Dame was considering joining the Big 12 in all sports except football.

I remember doing a radio bit around this news, where I did a fake phone call between Big 12 commissioner Bob Bowlsby and Notre Dame Athletic Director Jack Swarbrick. In it, I had Bowlsby convincing Swarbrick why the Big 12 was the right move. In hindsight it was probably a really corny radio piece, but I suppose that’s not exactly the point here.

Alas, the move never happened, and the Irish eventually ended up as a partial member of the ACC. With the news this week that Notre Dame was considering joining the ACC as a full-time member (which was shot down by Swarbrick), I thought back to the summer of 2012. How might the Irish joining the Big 12 have changed, not just the Big 12 conference, but the entire college football landscape?

During the alleged discussions, the plan was for Notre Dame to join the Big 12 and begin by playing 3 games per season against Big 12 teams in football and eventually up that number to 6 games per season. The Irish would have joined the conference full-time in every other sport.

Just the thought of Notre Dame-Texas becoming a biennial event (or every 3 years) just makes me salivate. I immediately think back to last year’s double-overtime win for the Longhorns over the Irish on the Sunday night of Labor Day Weekend. As you may recall, the ratings for the game were enormous.

And had we not gotten Notre Dame-Texas every season, we could have had Notre Dame-Oklahoma, Notre Dame-West Virginia (two old Big East rivals) or even Notre Dame-Baylor (how does Catholics vs. Baptists sound?).

The ACC eventually won out over the Big 12, which I believe had nothing to do with the Big 12’s perception as being chaotic. First off, the Big 12 would have had no issue with the Irish extending it’s deal with NBC, which they eventually did in 2015. The conference already had the Longhorn Network as a separate entity for Texas.

But there were many benefits at the time for ND going to the ACC. At the time, the ACC was the weakest of the Power 5 conferences in football. Prior to the 2012 season, the ACC was 1-12 in BCS-affiliated bowls since 2000. It placed two teams in BCS bowls in the same season only once. Also in 2012, Notre Dame was struggling (although they made the BCS Championship game the very next season), going 2-10 in bowl games since 1995.

Furthermore, the ACC academic reputation was superior to the Big 12, something ND takes seriously. At the time, Notre Dame was tied for 17th in the U.S. News and World Report. The ACC had seven representatives ranked in the top 50 — all ahead of the only Big 12 representative, Texas, which was tied for 46th. The ACC  was also a better cultural fit than the Big 12, as many of Notre Dame’s alumni are spread up and down the east coast, where ACC schools such as Boston College, Syracuse, Maryland, North Carolina, Virginia, and Miami all reside.

In the end, it just made more sense.

But while it would have been a ton of fun for Big 12 fans in all sports, and would have given the conference one of the blue-blood programs in college football, I am not totally convinced the relationship would have changed what’s been a tumultuous couple of years for the Big 12.

First off, Notre Dame would have immediately stepped into the conference and sat down at the head of the table with the likes of Texas and Oklahoma. While then-Texas AD DeLoss Dodds was a big proponent of having the Irish join the Big 12, who knows how that dynamic would’ve played out between the powerhouse programs.

Also, since the Irish would’ve still been “mostly” independent in football, the talks of the Big 12’s demise would not have gone away. A Big 12 Network would still have never happened, even with Notre Dame. The Big 12 was late to the party in the world of conference networks, and with Texas and Notre Dame having their own side deals (LHN and NBC), any kind of conference network would’ve likely been diluted and of less interest to television networks.

As a result, it’s possible that bad blood amongst the conference could have developed had Notre Dame been the latest to play by its own rules. Remember, that’s what destroyed the old Big East. There were the pro-basketball schools and the pro-football schools. Their missions and goals were different and the conference eventually collapsed. Also, that’s one of the many things that led to Texas A&M and Nebraska leaving, both Universities felt Texas played by its own set of rules.

Could a similar storyline have played out with the Big 12 and the Irish?

Unlike some of the ACC schools (Syracuse, Boston College, Miami) who knew Notre Dame from their Big East days, only West Virginia had any real ties to the Irish. The dynamic and relationship would’ve been drastically different.

In the end, I still will believe that the biggest, and most realistic, “miss” for the Big 12 in recent years was Louisville. Of course there were the Clemson and Florida State rumors, but that was a pipe dream.

In fact, maybe Notre Dame was always a major pipe dream as well.

**If you want a chance to win FREE Big 12 gear from your favorite team, be sure to sign up for our weekly newsletter! **